At South Ural State University, much attention is paid to broadening the horizons of international partnership and the promotion of the Russian language and culture among foreign citizens. One of the most important divisions at the university which works on this task is the Pushkin Institute center.

The SUSU Pushkin Institute Research, Education and Coordination Center was founded in 2014 as part of a Russian Federation state program “Development of Education”, which defines certain events aimed at improving the quality of education and supporting the accessibility and popularity of online education. The relevant Government Resolution states that it is necessary to create a partner network for the Pushkin Institute, which involves the leading universities in our country, including South Ural State University, to hold the event entitled “Development of Open Education in Russian, and Russian as a Foreign Language”. The SUSU Pushkin Institute center has won 3 grants from the Ministry of Education and Science of the Russian Federation over the course of its existence, thanks to which the university has made a significant contribution to the teaching of Russian as a foreign language.

In 2014-2015, the SUSU Pushkin Institute center earned a subsidy to fulfill the plan of events for supporting the Russian language and teaching subjects in Russian. Thanks to this grant, the center has begun academic and awareness work far beyond the boundaries of the university. The head of the Department of International Relations and Regional Studies of the ILIC Lyudmila Shestakova held negotiations with relevant agencies and organisations in Kazakhstan and China, as well as in academic institutes in which staff from the SUSU Pushkin Institute center completed continuing education courses for their foreign colleagues.

SUSU staff have developed programs approved by the Pushkin State Russian Language Institute and the subordinate authorities to hold continuing education courses: Methods of Teaching Russian as a Foreign Language in Universities and Schools; Project and Research Work for Students; and Selected Questions for Physics Courses; and the Solution of Olympiad Questions. In China, 192 teachers from the Institute of Slavic Languages of the Harbin Pedagogical University, Heihe University, and the Zhengzhou Railway Vocational and Technical College have completed continuing education courses. In Kazakhstan, 52 teachers of mathematics and 24 teachers of physics improved their qualifications. The unique features of the university, one of the key fields of which is a focus on innovative technologies, allow the SUSU Pushkin Institute center to use unique developments in the academic processes. In 2016-2017, the university has earned a grant to fulfill the project on “Development of a Robotized Dialogue System for Teaching Russian Language to Various Audiences with Further Use in the Existing System of Electronic Support for Studying Russian and Online Education in Russian” as part of the Russian Language federal target program (FTsP RYa 2016-2020). The goal of the research team under the guidance of the head of the Department of Russian as a Foreign Language Elena Harchenko, consisted of creating a program for working in a virtual office with a system for processing speech samples, massive open online courses, and the behavior program of an anthropomorphic robot.

Together with the SUSU School of Electrical Engineering and Computer Science, the software and hardware for the Vanya robot was created. Vanya is able to recognize speech and generate responses in Russian. Under the guidance of SEECS Department of Informational and Measuring Technology Associate Professor Dmitry Katsay, the team developed scenarios for the robot’s behavior. It can be used as a teacher’s assistant for Russian as a Foreign Language courses. The project was presented at the Moscow International Education Fair. When it is working, the robot can actively interact with its audience and illustrate its speech on a monitor. 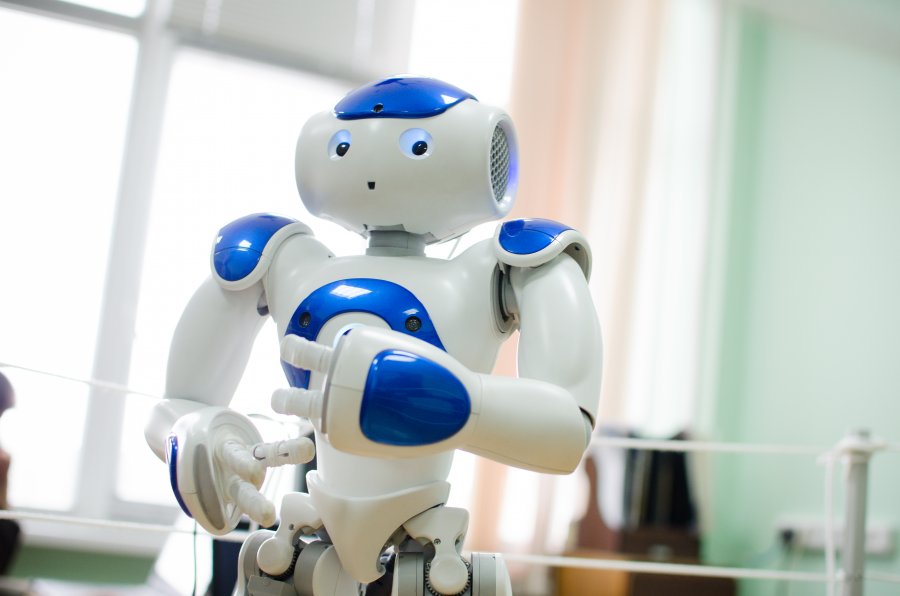 Using Vanya during a lesson activates students’ attention and helps them overcome their psychological barrier.

In the course of the work of SUSU researchers and teachers, a base of speech patterns from native Russian speakers was created, which involved the methods of analysis similar to measurement and control equipment. As a result, the researchers created a patented robotized system including 3 software programs and 1 database. The SUSU researchers set the task of creating a database of both correct and incorrect pronunciation. To this end, they created a phonetic index with standard pronunciation in Russian which Arabic and Chinese speakers can understand. It includes speech samples from native speakers of those languages with the unique national features of pronunciation. The index includes 39,000 sound files which are used in exercises and with the robotized dialogue system.

One more important task that was outlined in the Development of Education program of the Russian Federation is the development of online education. In this project, under the guidance of Deputy Director of the Institute of Open and Distance Education Olga Elagina, the SUSU research team created 4 nationally-oriented massive open online courses (MOOC) in Russian phonetics for native Chinese and Arabic speakers.

“The virtual language lab and massive open online courses allow everyone to improve their knowledge in Russian phonetics without leaving their apartment – they just need access to the Internet,” notes Yadviga Leonidovna.

Opening of the Pushkin Institute Partner Network in China

In 2018, SUSU earned a subsidy for holding events aimed at the full functioning and development of the Russian language, thanks to which South Ural State University began its work on creating a partner network for the Pushkin Institute at partner universities offering education in Russian in China. The goal of the program is to promote the national language of Russia in the international academic space, to form a positive image of our country, and to increase its international authority.

According to the project, SUSU will open at least 8 centers for the Pushkin Institute in academic institutions in China with which the university is negotiating. The program will be fulfilled as part of a partnership with the Federal Agency for the Commonwealth of Independent States, Compatriots Living Abroad, and International Humanitarian Cooperation (Rossotrudnichestvo), the Association of Technical Universities of Russia and of China (ATURC), and the University of the Shanghai Cooperation Organisation (USCO). Work on forming the partner network is coordinated by the Head of the Department of International Relations and Regional Studies of the ILIC, Lyudmila Shestakova.

The programs will be fulfilled using an integrated subject and language approach, which involves the use of machine translation, neural network training, voice identification, and so on. The focus will be put on such Industry 4.0 technologies as information protection and security in technological processes, industrial Internet of Things, artificial intelligence, and machine learning.

Within the project, there are a number of events planned for Chinese teachers from partner universities: a webinar on teaching methods, master classes, continuing education courses, and other events. In teaching students and schoolchildren, interesting forms of education will also be used, including a contest in Russian calligraphy, a contest for promoting Russian on Chinese social networks, and various Olympiads.